Current State of Cleanup Levels and Approaches for Petroleum-Contaminated Sites

A States Survey was conducted by the Interstate Technology and Regulatory Council (ITRC) TPH Risk Evaluation at Petroleum-Contaminated Sites Team. A total of 53 complete responses were recorded from 44 states (a few with multiple programs), Washington, D.C., and Puerto Rico.

Risk evaluations for petroleum release sites present complex and unique challenges to site managers, risk assessors, regulators, and other stakeholders. Risk characterization based on TPH concentration measurements in different environmental media may be used for risk-based corrective actions at petroleum release sites. However, chemical compositions of petroleum hydrocarbon mixtures are complex and subject to change over time due to fate and transport processes. Although methods to characterize risk for individual constituents of TPH are well accepted, methods to assess cumulative risk posed by the multitude of petroleum-related compounds typically included under the term “TPH” have yet to be widely accepted and employed. This is compounded by inconsistencies between published guidance for the risk-based assessment of TPH-related compounds and requirements for expensive laboratory tests that might not be available in many areas of the country. Better guidance is needed to help states develop consistent methodology for establishing risk-based cleanup levels and for establishing and approving methods for risk-based evaluation and corrective action.

Question 2: Are you aware of sites with analytical results below screening levels/cleanup levels/standards that have exhibited problematic or nuisance conditions relating to petroleum impacts (e.g., odor, flammable vapors, aesthetics) and how often does this occur?

Response Summary for Q2: Almost two-thirds of respondents reported encountering otherwise compliant sites with nuisance conditions. A smaller number, about 1 in 10, encounter this situation regularly. Use of TPH standards did not appear to strongly influence whether or not this type of problem was reported. 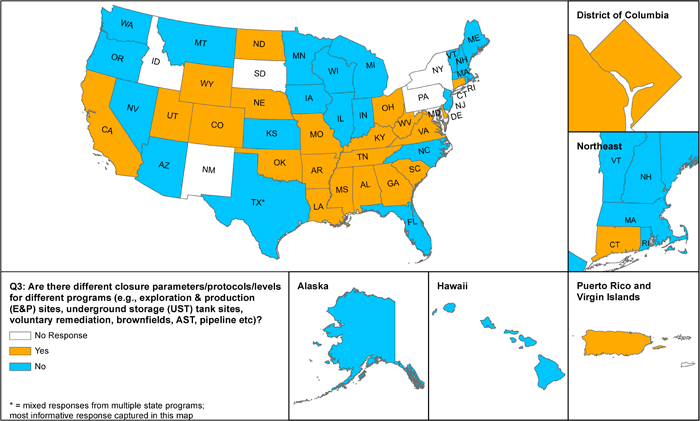 Question 4: Are the contaminant-specific screening levels/cleanup levels/standards used by your program based on levels published by another agency, e.g., EPA’s Regional Screening Levels, etc.?

Response Summary (Figure Q4) see Response Summary Table: Most respondents use state-determined screening levels/cleanup levels/standards. Most of the remainder use either EPA RSLs without modification or combined state levels and RSLs or modified RSLs. 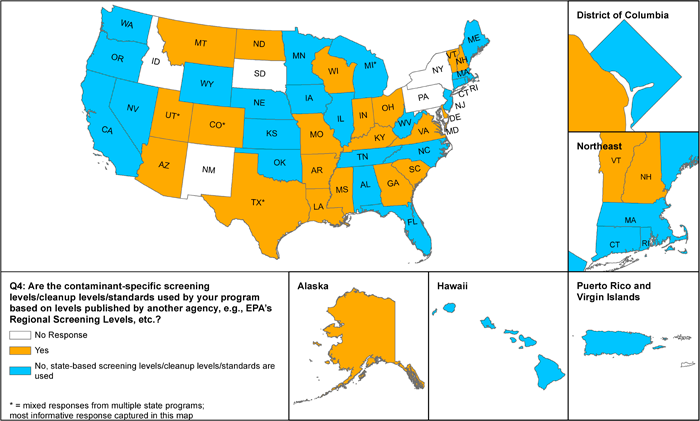 Question 5: Why does your state or program NOT USE fractionated hydrocarbon analysis for environmental investigation/remediation of TPH? Please select all that apply. 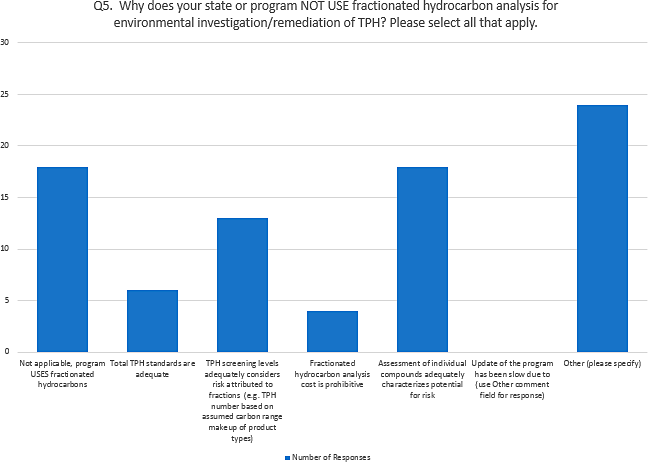 Question 6: Are the vertical screening distances recommended by ITRC and U.S. EPA implemented/accepted by your program for PVI screening?

Response Summary (Figure Q6): ITRC vertical screening distances for PVI are accepted by about a third of respondents with a slightly lesser fraction considering them for future use. 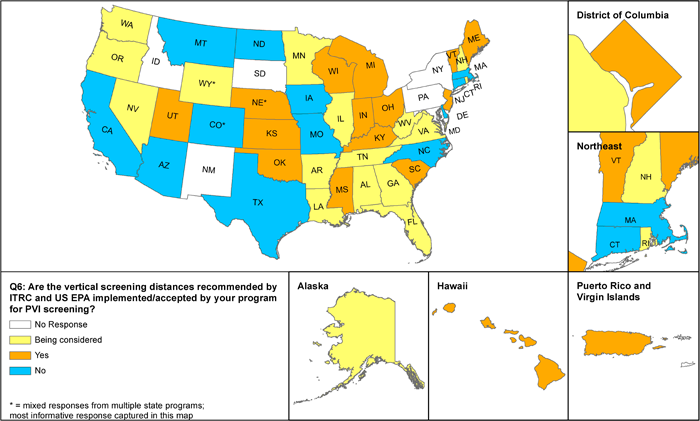 Question 7: Does your state have specific guidance with regards to the discharge of TPH-impacted groundwater to surface water?

Question 8: Recognizing regulators often have the ability to approve low-threat closures that leave residual TPH in soil and/or groundwater, in your state, is there a policy or statute under which a discharger/responsible party has the right to leave any amount of residual TPH in soil and/or groundwater (meaning, the state regulator has little or no input on the final decision)? 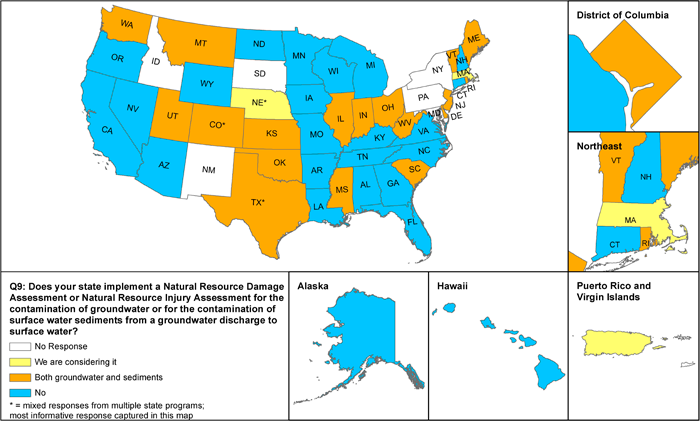 Question 10: Does your program have a specific protocol or field methods to require odor, visual, or other field methods for characterizing TPH impacts? Select all that apply and provide any thresholds (quantitative or qualitative) associated with the method.

Response Summary (Figure Q10) see Response Summary Table: About half of respondents indicated they had protocols for using visual, odor, or photoionization detector (PID) readings to evaluate petroleum impacts. Respondents who did not have specific protocols also cited these methods as commonly used. Only a handful of respondents indicated they had protocols for the use of dye or immunoassay tests for TPH and other field methods as suggested in Appendix C. 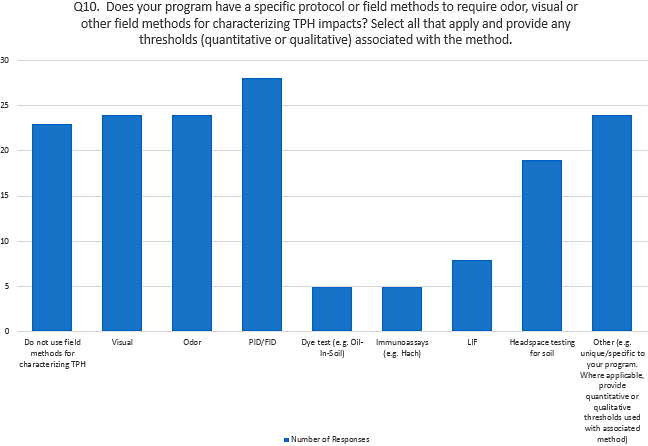 Question 11: Which analytical parameters does your state or program use for regulatory compliance or evaluating soil or groundwater contaminated with TPH products? (Please check all that apply).

Question 12: How are measurements of screening levels, cleanup levels, or standards of total or fractionated hydrocarbons used within your program (select all that apply). 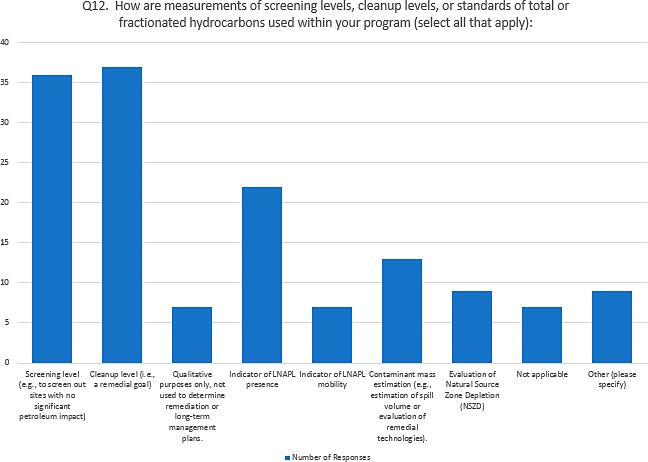 Response Summary (Figure Q13) see Response Summary Table: Respondents were evenly split between those that did and did not have specific guidance on measuring ecological impacts of a release. 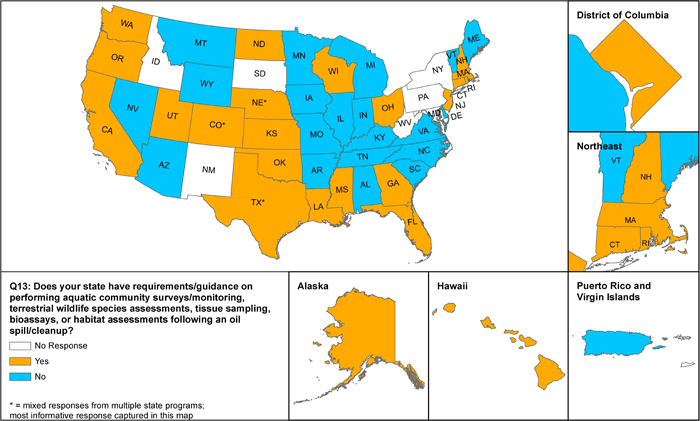 Question 14: Does your state require remediation of TPH contamination based only on ecological risk, if human health risks are not a concern? 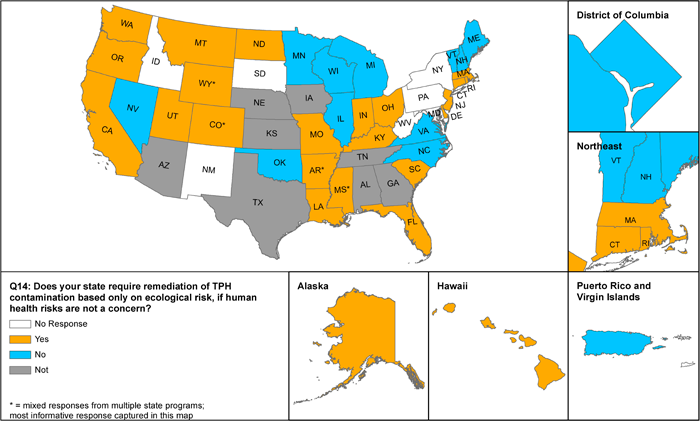 Question 15: With respect to TPH, does your specific program follow a publicly available, written guidance for conducting an ecological risk assessment? 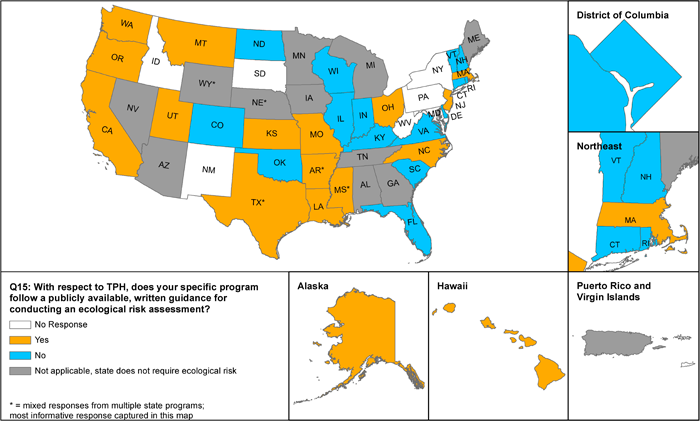 Question 16: What approach does the state or program follow for addressing ecological impacts of TPH? 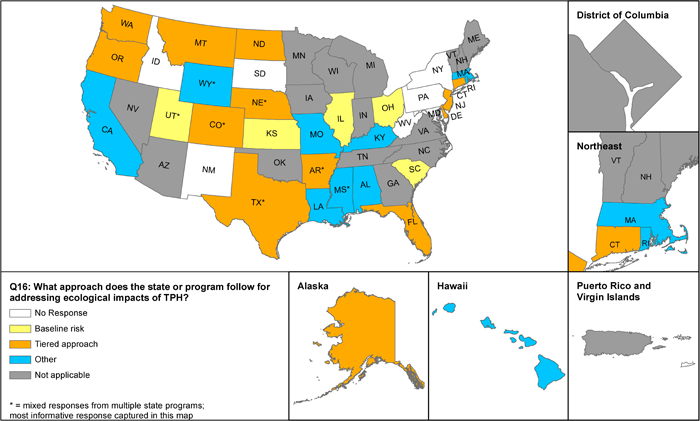 Question 17: Does your program utilize screening and/or cleanup/closure levels for TPH contamination in any media? 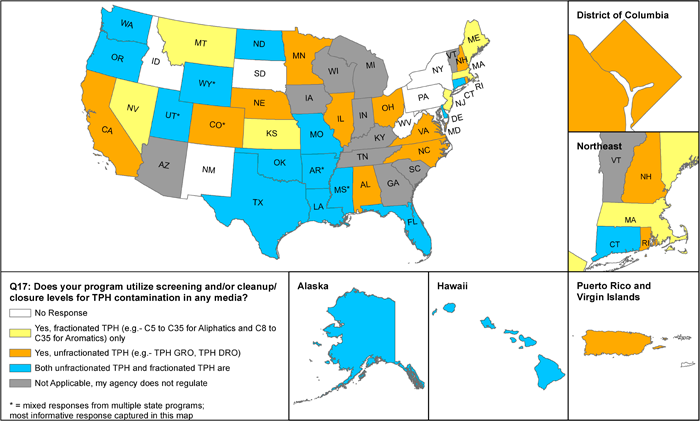 Question 18: Why is your program using fractionated screening levels/cleanup levels/standards? (select all that apply) 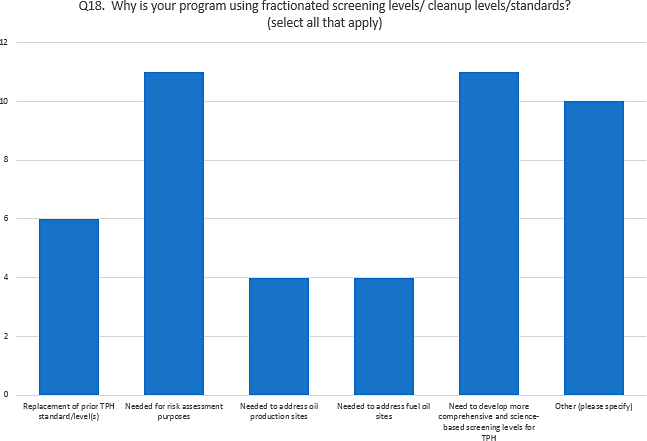 Question 19: Are you aware of previously closed cases that were reopened due to the use of closure levels that were based on fractionated standards?

Response Summary for Q19: Respondents were not aware of any closed case that had been reopened due to the use of fractionated TPH standards.

Response Summary (Figure Q21): Active remediation was identified as by far the preferred option for addressing TPH when no indicator compounds are present. The second option was pathway elimination, closely followed by use of additional analytical data and numerical risk assessment. 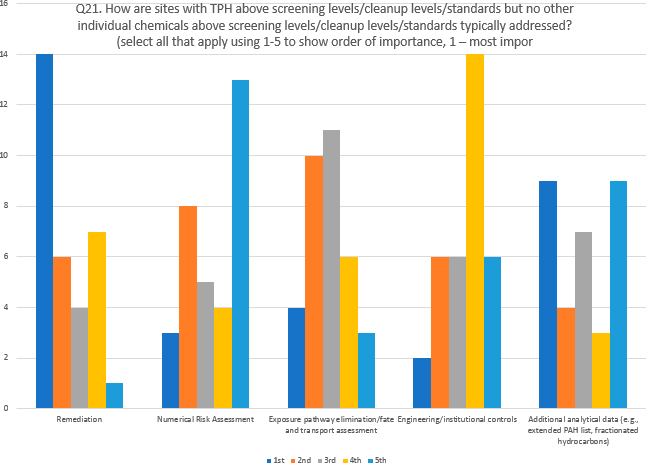 Response Summary (Figure Q22): Half of respondents do not evaluate for TPH degradation products. The eight respondents who do consider polar compounds indicated they are considered at certain sites on a site-specific basis to determine breakdown rate, evaluate new versus older spill, or evaluate intermediate and unrefined products. 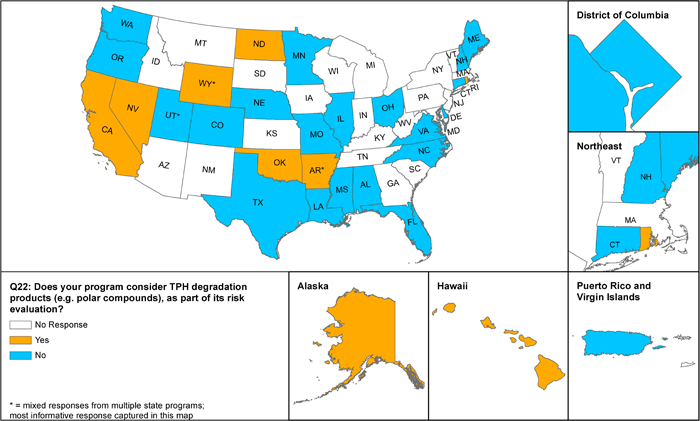 Question 23: What analytical methods or combination of methods are required by your program for TPH? Select all that apply. 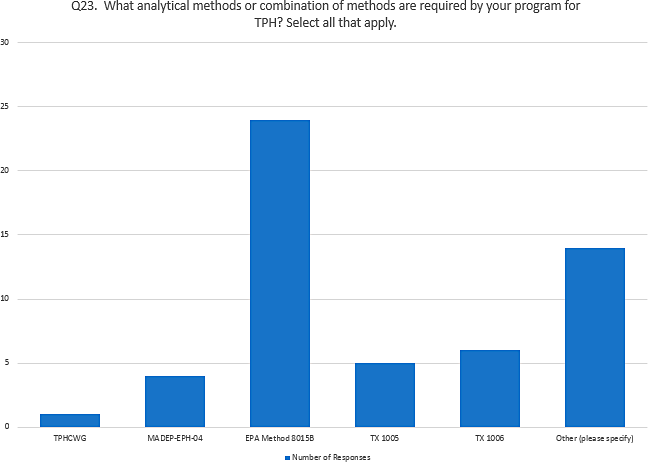 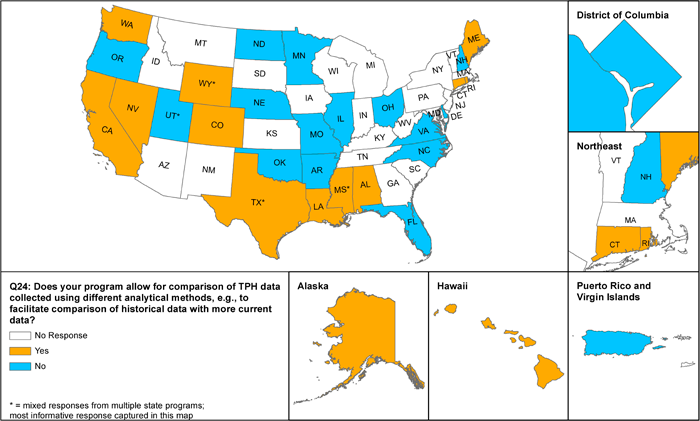 Response Summary (Figure Q25): Respondents were evenly split between allowing and not allowing SGC. A quarter of the total allow the use of SGC along with non-SGC data. A number who identified SGC as allowed indicated that it was only to be used for removing naturally occurring polar compounds, not petroleum degradation products. Two states require SGC. More than half of states that use unfractionated TPH do not allow SGC. 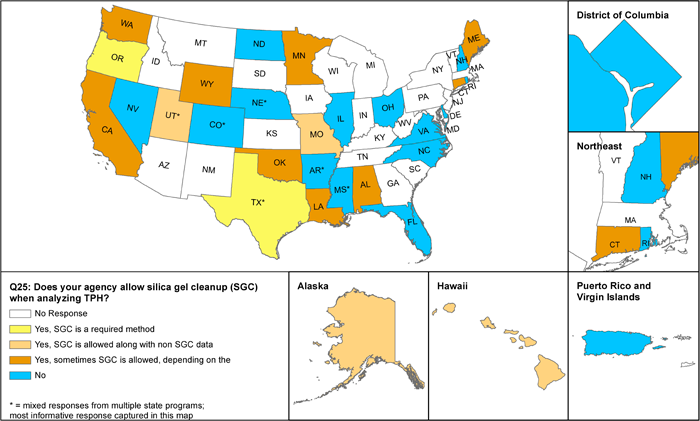 Question 26: What is the basis of your state’s screening levels/cleanup levels/standards? Select all that apply.

Response Summary for Q26: Half of the respondents indicated that their screening levels/cleanup levels/standards are risk-based values. A few also mentioned background and/or taste/odor as the basis.

Question 27: For which media does your state screen or evaluate TPH levels? Select all that apply.

Response Summary (Figure Q27) see Response Summary Table: Soil and groundwater are evaluated for TPH by more than half of respondents. Many also evaluate gas/vapor or air (ambient and indoor), with a lesser number evaluating TPH in air. A few noted other media such as surface water and sediments. 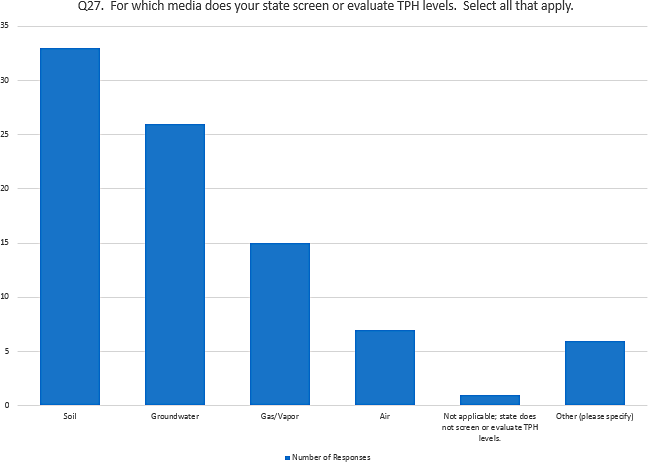 Response Summary (Figure Q28): Only a third of respondents would allow site-specific levels for TPH or TPH fractions. 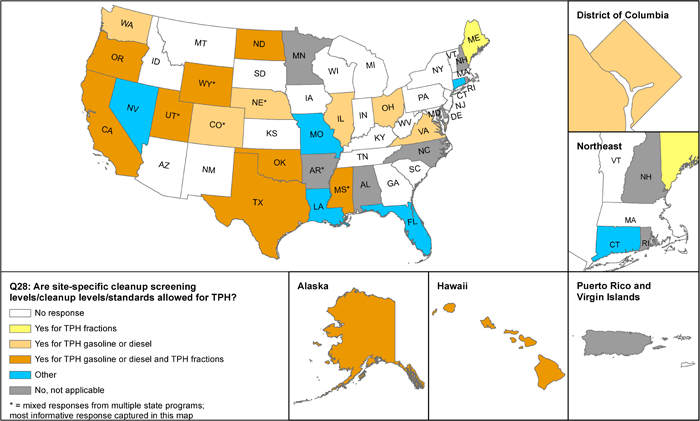 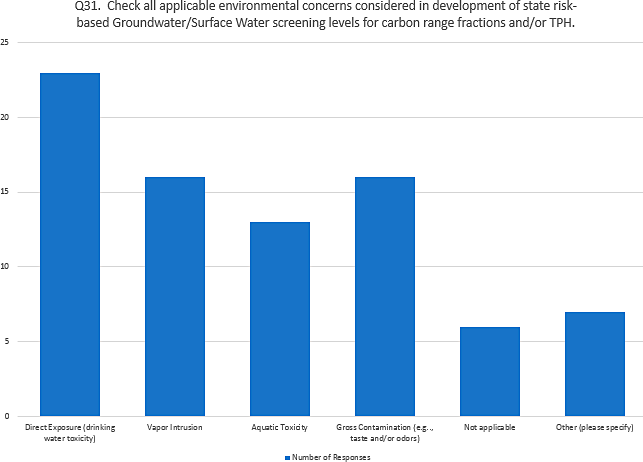 Question 32: Do you have any other thoughts regarding your state or program’s current use, or choice not to use screening levels/cleanup levels/standards levels for TPH? For example, are there sites/circumstances where the use of screening levels/cleanup levels/standards for petroleum hydrocarbons would have been helpful, or conversely where it may unnecessarily hindered site closure? Please describe.

Response Summary for Q32: A third of respondents provided additional comments with most describing how their programs use, or why they do not use, TPH. Several expressed an interest in new science and national guidance regarding TPH and petroleum metabolites while a similar number felt that only indicator compounds should be evaluated or that TPH should only be used for screening purposes.

Permission is granted to refer to or quote from this publication with the customary acknowledgment of the source (see suggested citation and disclaimer). This web site is owned by ITRC • 1250 H Street, NW • Suite 850 • Washington, DC 20005 • (202) 266-4933 • Email: [email protected] • Terms of Service, Privacy Policy, and Usage Policy ITRC is sponsored by the Environmental Council of the States.